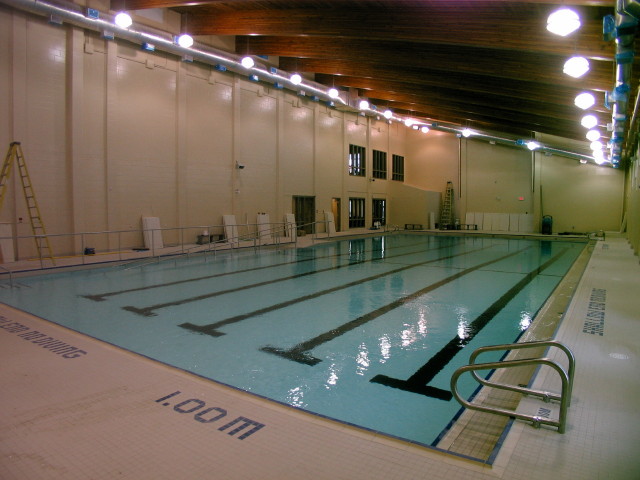 There are three options for swimming in Sydney, Nova Scotia. Shortly after P was born, we frequented the large pool at the Frank Rudderham Family YMCA. Like the rest of the building, it had recently been renovated, so the pool was bright and clean, with lots of toys on hand for water-wing-clad toddlers. But when it came to swimming lengths, the pool schedule never jived with mine. Plus it was pricey to maintain a Y membership, if all I was going to do with it was swim a few times a week.

So I looked elsewhere, and settled on a small pool in the local Holiday Inn. It’s a typical hotel pool – narrow and shallow, but just long enough to accommodate simple lengths. It also has a waterslide and a hot tub, perks which made up for its size and location. The hotel sold me a six-month pass, so I could come by whenever I liked. Often I’d have the pool to myself. But sometimes I’d show up to find it full of shrieking kids, or gossiping seniors, with no spare space for a lap-swimmer like me.

That left the Kiwanis Pool, a dark horse candidate despite being closest to our house and right next to P’s school. I tried Kiwanis a couple of times, and even took P for lessons there before the sabbatical, but something about the place rubbed me the wrong way. I think, like a lot of older Caper businesses or institutions, it felt sort of insular – like, the manager seemed dubious about selling me a pass, and I got a lot of odd stares from the older folks swimming lengths. Plus it was busy. Plus the showers were in disrepair, and the pool itself was grungy. So I gave Kiwanis the kiss-off and went on my way. Then came France, with its Olympic-sized pool stuffed to the gills with Frenchmen wearing Speedos and swim caps. I had a few good experiences at the Marx Dormoy Piscine, but they were few and far between. Often, I arrived after 45 minutes of travel to find the pool closed for an event. Just as often, I managed to get in, but found the pool insanely overcrowded. Once I tried to swim in a lane with 10 other swimmers, all moving along in the right-hand lane, but all at slightly different paces. I tried to pass a particularly slow one, misjudged the distances (I can’t wear my glasses when I swim), and ended up bonking skulls with a woman swimming in the other direction. I think that was my last visit. Swimming in a city is almost never a solitary practice, but I was looking for a bit more space than that to stretch my arms and legs.

Upon returning home to Sydney, one of my first stops was the Holiday Inn, to renew my pass. But the hotel manager (who always looked at me a bit funny, as if I were somehow taking advantage of his facilities) sputtered something about the locker rooms being under renovation at the moment.

“Is the pool closed?” I asked him.

“No, the pool is open…just…you can’t use the locker rooms to change…” He went on to say he thought they’d be available again sometime next week, so maybe I should wait till then. Just as well; right after that, Sheila got called in for surgery (she’s doing fine, by the way), so I wouldn’t have had the time to swim anyhow.

But while Sheila was convalescing, I was responsible for walking P to school, and I kept passing the Kiwanis Pool. Judging from some of the weather-worn signage on their front doors, they’d been closed for renovations at some point while I was away, but they seemed to be open now. Better still, I saw their schedule would allow me to drop by and swim lengths for half an hour immediately after dropping off P. It was too good not to check out.

The manager remembered me, and proudly showed off their newly tidy pool. I learned that, although they’d been planning the renos for some time, they were hastened by damage caused by the flood last October. Evidently keen to recuperate costs, she was much more aggressive in selling me a pass. I gave it a try. The showers were still mostly busted, but there were usually one or two that wouldn’t scald you with hot water. The pool itself was a good temperature, and though it was certainly busy, my time in France had changed my attitude. I was now willing to share a lane with one old Caper.

In fact, the first time I slipped in to share the lane, a remarkable little thing happened. The codger swam up to me and said, “Here’s how we’ll do it. You swim that side, I’ll swim this side.” This was new; in all my lane-sharing experiences, I’d always gone up one side and down the other. I had three reactions in quick succession:

First: “Who the hell is this old guy, telling me how to swim?”

Second: “Hang on…that’s actually a much smarter way to share a lane.”

Third: “Holy crap, this guy spoke to me in English!”

That last fact, while most obvious, did the most to sell me on the Kiwanis Pool. In the French pool, I felt like I was at a huge disadvantage – half-blind from not wearing my glasses, half-deaf from the echoing din, and then trying to understand instructions or requests from fellow swimmers as they churned past me. Everything was suddenly so much simpler. Up one side, down the other. English. I could do this.

I’ve been back a dozen times since then – far more than I ever got to swim in Lille. One of the other visits, I shared a lane with a young Chinese man, probably a CBU student. I explained the “new” system slowly and patiently – up one side, down the other. He nodded and said yes, then waited for me to demonstrate it, to make sure he understood. “Buddy,” I thought, “I know how you feel.”