My last post about AMoS was thematic; though it allowed me to roll out my main characters (I have a lot of main characters), it was mostly a rumination on art, creativity, and the love/hate relationship we writers have with our muse. But what about the millions of potential readers who don’t consider themselves artists? For awhile, I didn’t have a theme they could connect with, but after some conversations with S about the book’s Big Bad, I hit upon something that felt timely (both in terms of the book’s setting and in our contemporary world) and universal: the dangers of unchecked progress.

Every good adventure story needs a baddie, and every good superteam needs a nemesis who serves not only as a threat but also as a dark reflection of their positive qualities. If my five-writer band (I have a LOT of main characters) were going toes-to-toe against a villain, then he or she should be a writer too – but one I don’t feel bad about maligning. I very briefly considered bucking expectation and making Shakespeare my bad guy – he’s basically impervious to bad press – but I found an even more unexpected positive angle on the Bard, and it was just too good to lose. No spoilers on that front just yet.

Dante and John Milton are excellent candidates for Dark Lord of the Literati. Even before scrutinizing their personal lives, their body of work has loads of destructive potential; in a novel where authors’ creations can come to life, these two would have the advantage of having literal armies of devils at their disposal. Both authors reek of reactionary Christianity and sexism (or, in Milton’s case, outright misogyny), but those sorts of ideologies are easy targets nowadays. I wanted more.

I also wanted “a threat as old as time” – another tired trope in fantasy literature, perhaps, but using an author from antiquity would serve to distance them culturally from the heroes, and could perhaps explain why their power is so much greater (hence why it takes five good guys to defeat one bad guy). There were a few Roman candidates, but if I wanted to make use of the mythology those guys evoked, I figured I might as well go back to the source they stole it from: the Greeks.

So, Homer. And here I had both biographical flexibility (nobody knows a thing about Homer’s life, and he may not even have existed, which I can use) and a thematic hook (The Iliad is about war, and war is bad). I imagined that Homer used his powers to start wars, just so he could write about them, so the peace-loving muses erased him from history. Now he existed as a ghost or something, trying to use other writers to do his dirty deeds.

There were three problems with using Homer as my novel’s antagonist. First, it felt predictable – as soon as I drop the slightest hint that the shadowy villain is a classical author, even the YA readers will be all, “Homer, duh.” Second, Homer’s name is not remotely scary. And finally, there’s a historical problem inherent in a gang of mostly 19th century heroes defeating a supernatural threat in order to avert war. The problem is, after 1814 (when most of the novel takes place), wars just got bigger and bloodier. The bad guy wins.

This was about when I talked to S, and she helped me figure out that, while none of my author-heroes were explicitly anti-war in their life or their writing (except H.G. Wells), quite a few of them had cautionary things to say about science and industry. In the 19th century, the Industrial Revolution was in full swing. Mary Shelley, Poe, and Wells all wrote exuberantly and at times optimistically about some of the potential outcomes – new forms of travel, psychological breakthroughs, and of course in Shelley’s case, reversing death itself. But they also saw that along with progress came the potential for mass acts of inhumanity – not only in the form of modern warfare, but also in systems like the slave trade which William Wells Brown (a former slave himself) condemned.

I realized I didn’t want a stock villain who championed war or suffering for its own sake. I wanted a foe who would justify that suffering in the name of progress – who’d say, “Tuck your heads down, get to work, and don’t ask questions.” Remarkably enough, two and a half millennia before the Industrial Revolution, there was just such an author. 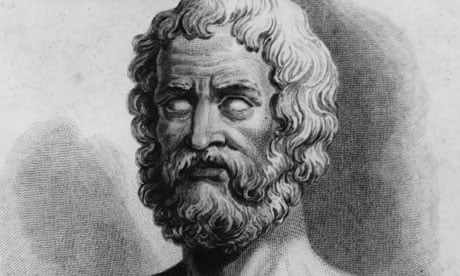 His name was Hesiod. He was a contemporary of Homer’s – according to legend, they even had a poetry showdown, which Homer won. Hesiod wrote about Greek mythology and cosmology, but his most famous work is Works and Days, an agrarian poem about the value of labour for its own sake. Though it’s a stretch to label Hesiod a fascist, he argues for a rigid hierarchy of power in the universe, and implies that it’s man’s destiny to supplant the gods (not woman’s, though – Hesiod was another flaming misogynist), providing we can stay on the most productive path.

In choosing Hesiod as my antagonist, I brought into focus a theme that seems more relevant now than ever. Hesiod’s spirit lingers metaphorically in our time; in the setting of AMoS, Hesiod’s shade is licking his chops, watching the 19th century advancement of technological and military might, and dreaming of how to accelerate it – perhaps by exploiting the powers of other authors – in order to usurp the gods and take his place as the Prime Mover. My heroes may defeat him, but they’ll also learn the truth – that progress is inevitable, and suffering is likely to increase as industrialization does.

Their task, moving forward, is not to stop progress. Their task is to temper it with humanity. That’s my theme.